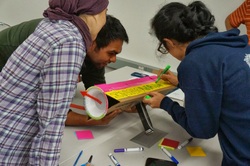 What is innovation?  Can it be defined easily or is it shaped by a complex system of people, contexts, eras, practices, and products?

Does innovation have to be a 'thing'?  Can it be an idea, or a process?  Some scholars, including H.G. Barnett, thought so.  To Barnett, innovation wasn't one single thing or activity that could be replicated at will.  Instead, it was a complex interaction of factors that could create the magic combination leading to innovation.

Do you think of Thomas Edison or Steve Jobs when you hear the word "innovation"? Innovation has long been tied to the image of the light bulb, popularized by Edison, and perhaps when you think of innovation you think of the latest version of the iPhone.  But can both be innovations?  One was revolutionary, touching almost every aspect of life from creating new infrastructure to carry electricity to changing the modern sleep cycle, while the other is usually incremental, with small changes and the gradual implementation of new features with every release.

Who can innovate?  Thomas Edison and George Westinghouse disagreed on this issue.  They both represent a time when innovation and invention shifted from individual inventors to corporate-sponsored research, which leads to another question: is innovation something a person does, or that a group of people do?  For Edison, the Wizard of Menlo Park, it was largely individual, while for Westinghouse it was a corporate effort.

Innovation is often seen differently by economists and anthropologists, but one aspect of it is the same: first the innovation is invented, and then it is disseminated.  This conclusion came after many years of arguing whether invention or dissemination was more important; finally, they were acknowledged to be two steps of the same process.  For more information, see Benoit Godin's paper cited below.

We started our story trying to define innovation through reading scholarly sources on innovation and investigating accounts of innovative activities.  We found very little consensus on what innovation is or isn't, and so we began to wonder: what does innovation mean to different people?  To find out, we decided to investigate.